ScoreLoop is supported by our readers. We may receive a referral fee at no additional cost to the buyer but the opinion in reviews belongs to the author. To learn more, please read our full disclosure.

There’s just something so invasive about a surprise drug test! 52% of Americans have tried drugs at least once, so to lose your job over something so minor is just nonsense. I personally use cannabis to alleviate chronic pain and I need it to function normally – that’s why I’m always looking at ways to dodge drug tests.

Why You Should Buy 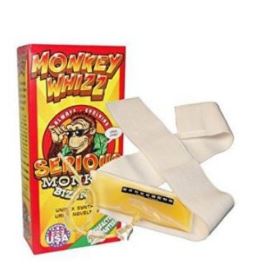 Monkey Whizz
If you’re a woman, out of all your options, Monkey Whizz is your best possible choice when it comes to faking out a drug test. It’s easily concealed, it’s quiet, and it’s got excellent build quality.
VIEW BEST PRICE →

Of course, dodging a drug test is no easy thing. There are a lot of reasons why someone would want to fake out a test, so the labs always have their eyes out for anyone trying to fool the test. One way that they will try and catch you cheating is by literally supervising your drug test. Meaning that lab technicians will monitor how you present your sample, to avoid any possibility of substitution.

But there are ways around that, and in this article, we’re going to look at one particular product: The Monkey Whizz.

You might be a little dubious trusting a company named Serious Monkey Bizzness. But don’t be so quick to judge, SMB is one of the most trusted companies on the market. They even have a built in loophole to avoid trouble with the law. See, when you access their website, the first thing you see is an instruction to leave immediately if you’re there to beat a drug test, since they only sell “novelty products”. Sneaky right?

They have a short but effective product line. Monkey Whizz is one of the two urination devices they offer. Monkey Whizz itself is a fairly simple setup. The star of the show is a plastic pouch that holds 3.5 ounces of synthetic urine attached to an elastic cotton belt. This comes pre-filled with their in-house Monkey Urine fake pee. A tube attached to the pouch lets you dispense the urine when you need to. Also included in the box are two heat pads to keep the urine at the correct temperature.

Strictly speaking, it’s a unisex implement. Since it’s a belt rig, it’s a lot less noticeable than a concealed bottle. A testing facility doesn’t have the authority to frisk you, but they can ask you to show what’s causing a bulge that doesn’t look right. Monkey Whizz won’t produce any such outlines, so you can step right through the doors without any problem.

Monkey Whizz is a very simple device. There’s only one control mechanism, and that’s the two clips on the dispenser tube. Lock them both to close it off, release to dispense. There’s no squeeze dispenser or anything, it’s purely gravity-powered, going out once you release the clips.

You’ll want to practice a little before the day of the test so that it looks natural. If you find that the dispenser tube is too long, you can cut it shorter as long as you keep both clips closed and thus keep any air away from the urine.

On the day of the test, attach one of the heat pads to the fluid pouch, on the side away from the temperature strip. Then secure the belt around your waist, temperature strip facing you, heat pad on the far side of the pouch from your body. Ensure it’s secure next to your body; this will help keep the urine warm. By the time of the urine test, you should have been wearing the belt for an hour already.

When the time comes to provide your sample, simply dispense the fake urine into the cup. The combination of your body heat and the heating pad should keep it in the correct temperature range; if necessary, check the strip to be sure. As long as it’s within 94 to 100 degrees, you’ll be fine.

Once that’s done, congratulations! You have successfully dodged your drug test, and all you need to do is wait for the positive results.

Some brands of best synthetic urine are microwavable as a quick way of getting it to the right temperature. This is not the case with Monkey Whizz; in fact, the manufacturer specifically recommends against it. The included heat pads are the recommended means of keeping the fake pee warm.

Still on the matter of heat, keep your temperature-checking to a minimum. Reading the temperature strip takes the pouch away from your body heat, and without it, the urine won’t reach the correct temperature. It’s even a known failure point, repeatedly mentioned in reviews, so keep the pouch on your body to ensure you get the right temperature range.

Trust in the heat pads. They’re designed to go warm rather than hot, so don’t worry if they don’t feel like they’re giving off that much heat. It’s a long-term slow-burn thing with them, and they’re intended to work with your body heat, as we’ve just mentioned. Take away your body heat, and the heat pads are a lot less effective. The good news is, they last 8 hours, so there’s no need to panic in case of delay.

Body heat alone will bring the fake urine up to about 90 to 94 degrees, and the heat pads are designed to take it the last few degrees, up to just around 100.

How Good Is Monkey Urine?

Here’s a minor problem: Monkey Whizz is not refillable. This means that there’s no switching it out for a different brand of synthetic urine that you trust more, and thus your pass or failure depends in large part on Serious Monkey Bizzness’ in-house brand.

Fortunately, Monkey Urine is a pretty good fake urine. It meets the standards for appearing as real urine to the eye and the lab equipment. It’s got the right color and the right scent, it’ll froth when given a little shake, and if left out for too long, it even forms bacteria, just like real urine. This is why you only open it on the day of the test; open it too soon, and that bacteria starts growing, and it’ll become clear to the lab techs that your sample isn’t fresh, or that you’ve contracted a urinary infection.

Chemically, it’s got all the markers the labs are looking for: uric acid, urea, creatinine, specific gravity, pH level, and a few other elements. It doesn’t use a biocide preservative, and thus avoids a marker of fake urine that the labs are specifically looking for.

If necessary, you can reheat Monkey Urine any number of times, as long as it doesn’t go over 100 degrees and as long as it hasn’t been exposed to air. Once air hits it, it’ll start forming bacteria. You can snip the dispenser tube a little shorter to make it more manageable if you need to, as long as you keep both clips closed to ensure no air gets in. It has a shelf life of about a year while still unopened, so if you want to keep a belt aside in case of any surprises, it’ll last you a while. Not forever, though, so don’t order it too early.

It’s no Quick Fix, but Monkey Urine serves its purpose quite excellently, and it’ll get you the pass that you need.

Where Can I Buy It?

The best choice is straight from the Authorized Store online. You can buy Monkey Whizz from some head shops, both in real life and online, but we don’t advise doing this. Getting it from the manufacturer assures that you’re getting a fresh product, instead of something that’s been running down its shelf life. Also, there won’t be any chance of your getting some other product instead of what you actually ordered. Even better, the manufacturer isn’t subject to the headaches of stock.

There’s a reason why Serious Monkey Bizzness has remained in the industry for just about 15 years. Monkey Whizz and its brother product Monkey Dong show that reason: excellent quality at a price that won’t break your budget, and a formula that gets you a pass on the urinalysis, as long as you follow the instructions.

If you’re a woman, out of all your options, Monkey Whizz is your best possible choice when it comes to faking out a drug test. It’s easily concealed, it’s quiet, and it’s got excellent build quality. You won’t risk it leaking out while you’re walking into the testing facility! The only better option is if you’re a man and get Monkey Dong. If you’re a woman, or just don’t need to fake a penis, then Monkey Whizz serves just as well.